Recently a few people have asked me about my breeding program for Aussiedoodle. It would seem reasonable that the term Aussiedoodle would be an abbreviated version of Australian Labradoodle, but it’s not. An Aussiedoodle is a cross between an Australian Shepherd and a purebred Poodle – usually a standard, but sometimes a miniature.

At Modern Doodles, we only raise multi-generational Australian Labradoodles and only mediums. I had big dogs for years – Golden Retrievers – but I decided I wanted dogs that I can pick up without help. My biggest Australian Labradoodle is Rory and at 40lbs, as long as I use technique, I can lift her easily onto the grooming table or into the dog bath. And, since she pretty much bolts when she sees me in my grooming gear, being able to pick her up is helpful. By the way, she loves the brushing part – it’s the bathing and drying part she doesn’t like.

So, next time you hear Aussiedoodle, think Australian Shepherd and Poodle.

I’ll only be a minute

As good as Gold

We did it! Modern Doodles was recently awarded Golden Paw status by the Australian Labradoodle Association of America (ALAA). All breeders who are members of the ALAA must meet basic health testing requirements, including hip and elbow clearances, but breeders that exceed the basic requirements become eligible for Silver and Golden Paw status.

We take our breeding dogs for an eye exam by a certified canine ophthalmologist every 18 months. In our case, we haven’t been able to locate one in Edmonton with a regular schedule, so we travel to Calgary. Yes, six hours on the road for a 12-minute appointment – but it’s worth it.

Also included in the requirements for the Golden Paw status are some additional tests that are done through DNA: exercise induced collapse (EIC) and progressive retinal atrophy (prcd-PRA). We also check for degenerative myelopathy and von Willebrand disease. We’re proud to be members of the ALAA. We want to do everything we can to have healthy adult dogs in our breeding program.

Our puppies get lots of attention, too – they are in the main part of our house, not tucked away in a kennel somewhere. We play with them, snuggle them and expose them to all the sounds, smells and activities of a busy household. Snuggling puppies is definitely the best part! 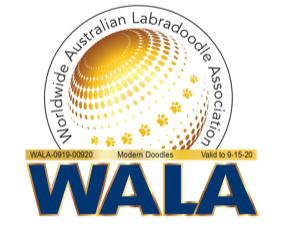 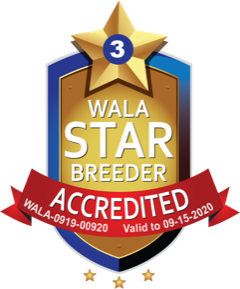 Pick of the Litter

Have you ever heard someone say, “I can’t believe I found my car keys in the last place I looked!” Of course that’s what happened. It’s because you stopped looking when you found them.

It’s possible we shouldn’t apply such logic when it comes to choosing a puppy but the notion of “pick of the litter” has been on my mind. Recently I’ve had a lot of conversations with people interested in one of our Labradoodle puppies. I love talking to other dog people but I find it interesting how many prospective puppy owners have a romantic notion of how they’ll know they are getting the right puppy. Somehow the phrase “pick of the litter” has caused some people to think that puppies can be ranked from best to worst.

I also chat to people who want to come see the litter so they can pick the one that comes to them first, because they believe that particular puppy is more well-adjusted than the others.

As a breeder, my viewpoint is different. I want to make sure the puppies go to the right homes. Do you see the difference? I’m looking at it from the puppy’s point of view. Which home is best, not which puppy is best.

Your preferences, your lifestyle – these things matter to reputable breeders. But paramount is the thought that everyone will be happy if we find the right home for each puppy.

I know my puppies. I help their moms give birth, I sleep beside them when they were new, I feed them, play with them, kiss them and snuggle them.

To find a great home for one of my puppies all I need is to know something about you. Think of it as eHarmony for dogs.

Who Can Resist That Face? 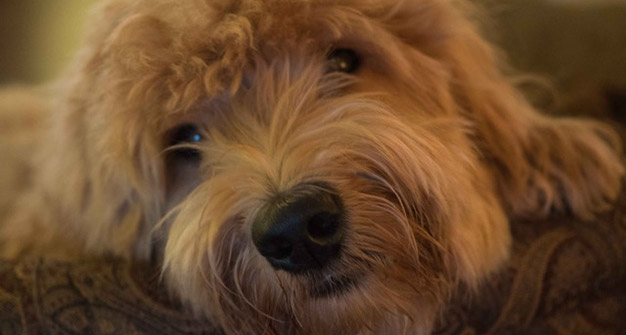 Our sweet Fynnley will not have puppies this year. It was confirmed by ultrasound that her breeding was not successful. We will try again for puppies in the spring of 2017. Her first litter last year was just so special, we will try again with Southern Charm’s Rango Tango of Coulee Labradoodles. We’ve had such wonderful reports of how well their puppies are doing!